International transport operator Keolis has today officially opened its new UK HQ in Cardiff, becoming one of the biggest companies to move to Wales in recent years.

The mobility giant currently operates some of the world’s busiest transportation systems in 21 major cities worldwide, with its UK business carrying over half the UK’s tram passengers and delivering a third of all UK rail journeys through its subsidiaries. The revenue generated by their UK operations was over £2.5 billion over the past financial year.

The move reaffirms Keolis’ commitment to Wales, where it is currently the majority partner in a joint venture with infrastructure specialists Amey delivering a 15-year programme to transform the Wales and Borders rail network and progress the Welsh Government’s ambitious Metro proposals. 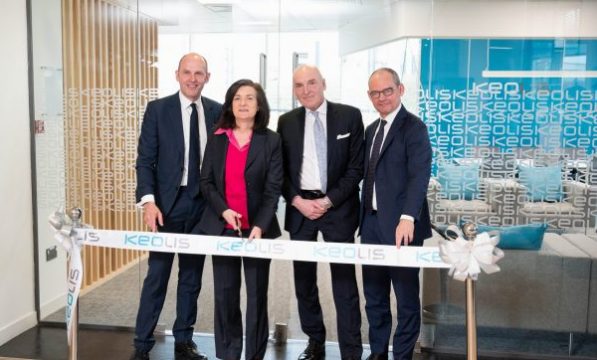 All UK HQ functions will transfer from London to Cardiff as part of the move, with Keolis UK CEO Alistair Gordon and Chair Sir Derek Jones now based in Cardiff as part of a 15 strong team of company directors, managers and support staff, many of whom have recently been recruited from Wales.

“Wales is a great place for our UK HQ to be based, with its strong commitment to business, skills and quality of life set alongside the extensive ambitions of Transport Wales and the wider transport and business community.

“Whilst we’ve had a presence in Wales for some time now, it’s fantastic to see our commitment to Wales cemented in the bricks and mortar of our new HQ.  We look forward to working proactively on both a national and regional level to help identify and support ways of helping to keep the people and economy of Wales moving as part of our long term commitment to the nation.”

Keolis has been in the UK since 1996 and today employs over 13,000 people across its contracts and franchises. During this time Keolis, through its various joint ventures has introduced more new trains to its franchises than any other operator.

“Keolis has many of the credentials in companies we’re looking to attract to Wales, combining international expertise with an ambition to develop its presence and workforce here. I look forward to working with them, and others, as we continue to send a very clear message internationally that Wales is open for business and has the expertise and ambition to thrive.”

“Keolis is an important partner in delivering our vision for a rail service that works for Wales and are already working with other companies across Wales to address challenges in the rail industry, including through their Innovation Lab.

“In line with our Economic Action Plan, it’s also good to see another living wage company with its HQ in Wales.”

Through its joint venture agreements, Keolis UK operates some of the busiest rail franchises, in addition to the iconic Docklands Light Railway, Greater Manchester’s Metrolink and the award-winning urban light rail network in Nottingham.

Globally, Keolis is responsible for successful transportation services in places as far afield as Australia, China, the United States and across Europe – operating a trams, trains, buses, bikes, autonomous vehicles and a whole host besides, often as part of an integrated transport network.

In the UK, through its joint venture agreements, Keolis UK operates some of the busiest rail franchises, in addition to the iconic Docklands Light Railway, Greater Manchester’s Metrolink and the award-winning urban light rail network in Nottingham.

These include some of the best-known brands in UK transport as well as the nation’s only high-speed rail network, HS1, in Kent and Transport for Wales Rail Services.