Keolis has won the franchise with its long term partner Go-Ahead under their Govia subsidiary (Go-Ahead 65% / Keolis 35%).

The partners have an established track record of successful joint ventures and currently operate three major UK rail franchises, Southern – which will merge into the newly created franchise – Southeastern and London Midland.

Alistair Gordon, CEO, Keolis UK, said: “We are pleased that the strengths of the Govia partnership have been recognised today in the awarding of this important franchise.

“We now look forward to working with the DfT and local stakeholders as we deliver these exciting new developments to the nation’s rail network.”

“Our bid for the franchise was focused on improving customers’ experience. I’m now looking forward to working with existing colleagues and welcoming new staff and together delivering this transformational franchise.”

The seven-year management contract, starting in September 2014, which replaces the Thameslink and Great Northern franchise (operated as First Capital Connect, FCC) will encompass the Southern and Gatwick Express routes from July 2015 and also include a small number of services and stations currently operated by Southeastern which will transfer in December 2014.

The TSGN network will serve London as well as a number of important regional centres, including Cambridge, Luton and Peterborough to the north of the region, and Brighton, Portsmouth and Southampton in the south. It also provides direct rail links to major airports (Gatwick and Luton) as well as St Pancras International and Farringdon station for links to Heathrow and Crossrail in due course.

During the course of the franchise, the Thameslink identity will be re-introduced and Southern and Gatwick Express brands retained.

Due to the complexity and scale of the planned changes to services and infrastructure the new franchise is let as a management contract where ticket revenues are passed directly to the government rather than retained by the franchisee. We are committed to delivering these changes and managing their impacts on customers.

Benefits for customers during the franchise 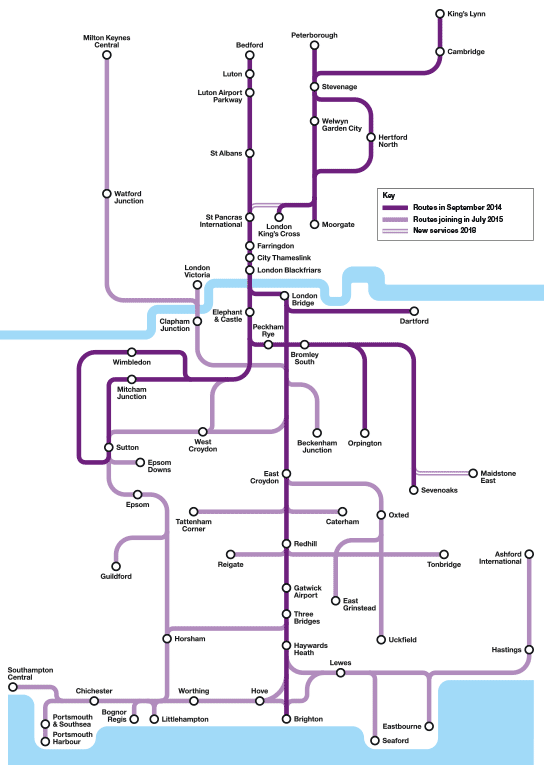